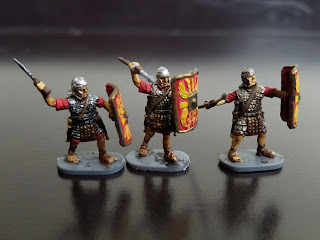 This is my first completed set for the Battle of Alesia Diorama. I have painted all 12 poses from the Caesar Roman Legionary Set II . The details on these bods are exceptional, and it was a pleasure to paint them. I left the bases unpainted because I will remove them when placing the soldiers on the diorama.
1 comment
Read more 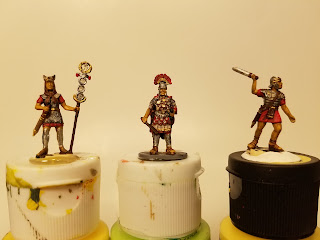 Ever since reading about Caesar's battle of Alesia , I was keen to make a diorama that captures the fierceness of this battle. The battle of Alesia was fought between 60.000 Roman soldiers under Caesar's command, and approximately 300.000 Gauls. Smaller number of them were besieged by the Romans in the city of Alesia, while the rest were part of the relief army. Using superior siege engineering and bold strategy, the Romans were able to carry the day. My diorama project will include 3 pieces. The first one, included here, is capturing the main action - the attack of the relief army. The second piece will depict the roman camp, and the third will focus on the attack of the besieged army on the inner wall. So far, I have completed only the basic terrain and fortifications of the first board and I will post here regular updates of my progress. While working on the diorama, I was not able to contain my excitement over the roman army bods from Caesar and Esci, and tried my pain
1 comment
Read more 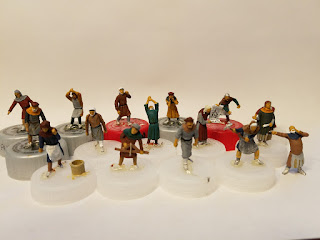 Almost every time I sat down to complete another mini project for my Bunratty Castle diorama , I ended up over excited to remember to take pictures from the process or even the result. I am therefore very happy that I took few photos when painting the  Valdemar Medieval Builders Set 1 . Below, I share few pictures from the results. Most of the figures have found their place in the diorama , while few are patiently waiting for their turn. I have also included few heavy conversions from the IMEX set American Pioneers , thanks to some gray stuff.
2 comments
Read more
More posts

Popular posts from this blog

It was love at first site the moment I laid my eyes on Bunratty castle during my holiday in Ireland. I was excited as a kid roaming around all the rooms, narrow staircases and corridors that connected with other parts of the castle in a way that seemed impossible. Right then, I knew that a new diorama project was waiting for me the moment I come home. Six months later, the diorama is already taking shape while I continue to work on the many remaining finishing touches.  The Diorama is done in 1/72 scale, on a 4ft*6ft (60cm*90cm) board. Add caption It is a glorious time at the castle. The local Bishop is visiting to bless the church that is under construction. He is flanked by strong retinue of men at arms and a knight. The workers at the church are hard at work on erecting the walls, and the castle blacksmith is outfitting the solders for an upcoming sortie in the nearby forrest. Everything happens under the watchful eyes of the castle guards.
Read more 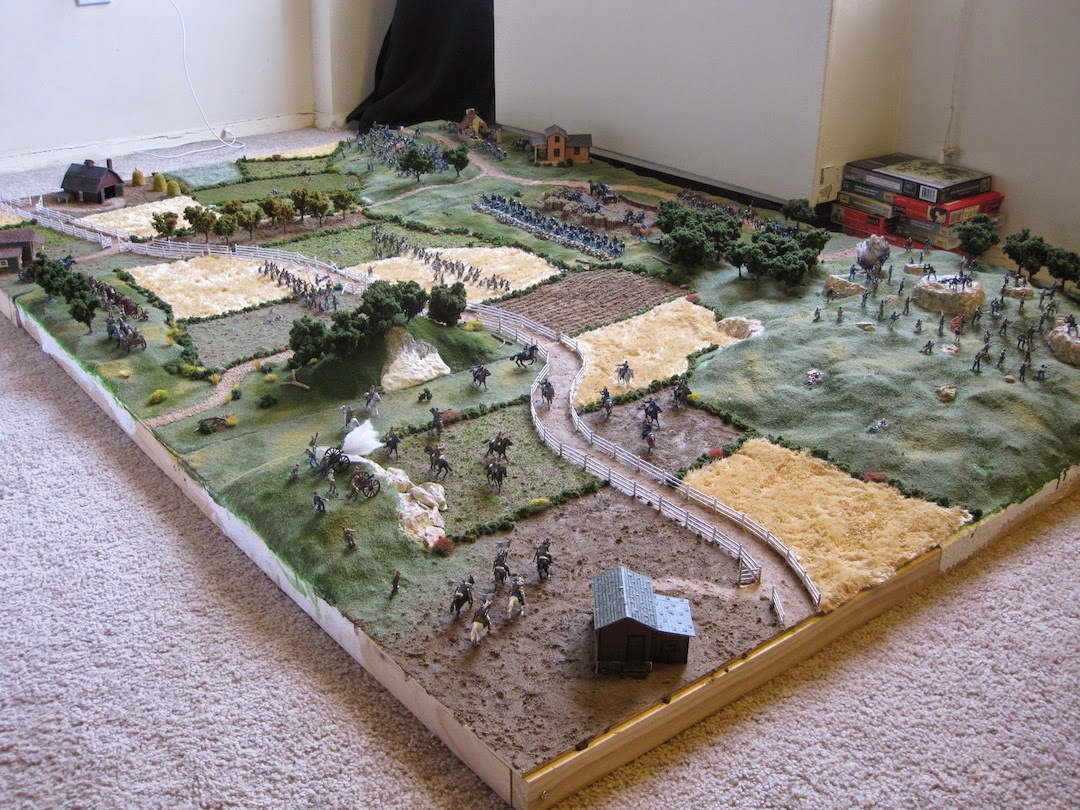 As many enthusiasts, I got bit carried away and taken as my first project a large-scale diorama from the American Civil War with proportions of 6*4 feet (2-1.2 meters). The diorama is in 1/72 scale.     The diorama is inspired by the Gettysburg battle, depicting several scenes of battle with various level of intensity, including - what I hope it is - a dramatic hand to hand combat. Although I have consulted historic record, the diorama is not intended to be historically accurate. For the project I have used model soldiers from Imex, Revell and Italieri, which I have also customized to create casualties or more interesting poses. In total, I have used more than 300 soldiers, 20 cavalry and 12 guns with crew. This is only my first project, and I am continuing to learn more from your blogs and good work.
Read more